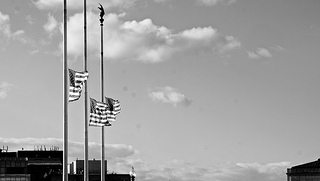 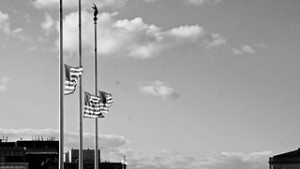 I had originally planned to put up a different blog post this week until I received a text from my sister:

“Hey Care, did you hear about the Boston Marathon??”

Sometimes you have to put your agenda aside when something more important comes up. Even after deciding to forgo the other post for this one – I still struggled with writing it. I wanted to run away. It felt so much easier to hide from it and not talk about it, skip a week of blogging and move on. What’s the right thing to say? What’s the right title? What’s the right photo? What if I don’t do it justice?

I found myself doubting, questioning, hesitating… I found myself holding back. Despite my fears of saying or doing the “wrong” thing – I decided to write this post because the biggest personal realization I take away from the bombings at the Boston Marathon is that I don’t want to live in fear.

After I got my sister’s text, for the rest of the day I found myself hiding from the news. I didn’t want to know what happened and who was hurt. Later that day I was in the grocery store, standing in the produce aisle, and trying to decide what kind of lettuce I wanted to buy when I overheard a woman talking to someone on the phone about the events. The first “news” I heard was when she said to the person on the other end of the line, “People died and were maimed…”

I couldn’t hide from it anymore. I didn’t hear anything else she said because all I could think was, “This lettuce doesn’t matter. It doesn’t matter what lettuce I pick. People’s lives have changed forever.” I was struck with grief and went back into hiding.

The next day, another moment of grief came again while I was out grabbing a bite to eat during a lunch break when I saw a discarded newspaper on an empty table. I decided to sit down and read the front-page news about the bombing while I waited for my food and I couldn’t finish the article. As I began to read the account of the events I felt like someone had punched me in the stomach and was suddenly stifling a huge sob that was trying to force its way out. I grabbed my food, went home and cried, and decided to stop hiding.

I wanted to write this because I was surprised at how affected I felt. Why I am having these moments where I feel absolutely overwhelmed with grief? I knew people that were there that day, but thankfully, none of them were hurt. I had even talked to the consultants that I mentor about how they were feeling and potential conversations to prepare for with the athletes that they work with and I never anticipated my own emotional reaction to it. I decided that if I was feeling this way, then there might be others that are feeling this way too.

After I stopped running away and just sat with the turmoil I was feeling, I came to realize that for me, the reason it has hit so hard is because even though I wasn’t there, and I don’t know anyone directly affected, and I’ve never even run a marathon, let alone the Boston Marathon…the people that were there are a part of my community. Whether they would have finished first or last, whether they were racing that day, or they were supportive spectators – they are a part of my endurance athlete community. And when we identify with a community, when they suffer, we suffer too.

Because I am a part of that community, the other realization I had about why it’s affecting me is because it is unbearable for me to try and reconcile such a horrendous and violent act during what I consider to be an incredible celebration of life. The greater athletic community is feeling affected by this as well.  Reactions from athletes in other sports all reflect the struggle of trying to comprehend how something so horrendous and tragic can happen during something so life affirming.

When something this unbelievably tragic occurs, people often find themselves wondering what the meaning is… the meaning of the event, the meaning of sport in their lives, and wondering if it’s all worth it. I’ve seen the same thing occur when someone goes down hard in a bike race and gets injured. “”Is this risk really worth it? Do I want to keep racing?” I’ve also seen it come up as athletes have watched their heroes fall. “If everyone is doping, what’s the point?”

For the people at the Boston Marathon that day, it wasn’t just about training for a finish line.  Collectively, it is thousands of sought-after dreams and goals being actively pursued, thousands of doubts being pushed aside, thousands of moments where they could have thrown in the towel, but didn’t. It’s personal triumph, overcoming adversity, doing more than you thought you could… even doing less and feeling the disappointment.

I wrote this because I needed to. And I wanted other people to know that if you find yourself distraught and affected, it’s OK. It’s OK to be sad. It’s OK to be angry. To be scared. To want to hide from it. And it’s OK to move on. To keep moving forward. To sign up for your next race.

Let it make you reflect on what meaning your sport has in your life. Many athletes forget about this as they get wrapped up in the numbers… what’s my heart rate, what zone am I supposed to be in, how much power am I putting out, what’s my cadence, what place did I get, was my time better or worse than the last time? Training and competition start to become a means to an end and we forget the meaning.

If you want to honor those that were directly affected, then allow these events to give you perspective. To solidify your values. To contemplate what is truly important to you in this life. To question your choices. To understand the difference between what is important to worry about and what isn’t. To let it be more than a means to an end and to not let anyone or anything take away what it means to you.