Attitude is the Secret to Winning 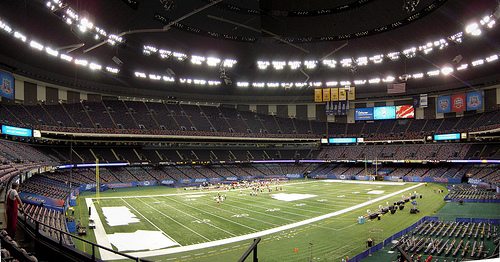 Getting ready to play the big game

Living in the San Francisco Bay Area, you can feel that the air is charged with energy and excitement for the upcoming Super Bowl XLVII (yes I had to look up how to convert the number 47 in roman numerals). I can’t wait to watch the game this Sunday and I’m not the only one. There are many exciting stories, both inspirational and controversial, that are happening with this particular Super Bowl (the fact that the head coach for the San Francisco 49ers and the head coach of the Baltimore Ravens happen to share the same last name because they are brothers, the choice to keep Colin Kaepernick as the 49ers starting quarterback over Alex Smith, the controversial Ray Lewis story), but the thing that motivated me to write my very first football inspired blog post was hearing John Madden talking to San Francisco 49ers head coach Jim Harbaugh.

I was driving home from working with a team on the subtleties of how beliefs and desire impact sport performance when I caught these two accomplished football coaches talking to each other on KCBS. At one point Harbaugh, recognizing that Madden has A LOT more experience with Super Bowl games than he does, asks Madden point blank, “What advice can you give me; 1st time coach going to the Super Bowl?” After first praising Harbaugh for being a great coach, he then gives him two pieces of advice for increasing his chances of winning the Super Bowl game AND THEY ARE BOTH MENTAL. Madden basically said:

What John Madden told Jim Harbaugh is that in all of his years of experience, these are the two most important things to consider when headed to the Super Bowl. He’s telling Harbaugh not to let his team lose focus on why they are there and what they are there to do. So take this to heart for your own performance. If you have an important event coming up, follow John Madden’s advice:

Don’t complain: Complaining usually means that you are wasting your precious energy and resources focusing on things that are out of your control. The teams and athletes that can roll with the punches and make the adjustments are usually the ones that claim victory.

It’s not over until it’s over: I’m all for celebrating success, but there is a time and a place. Do it too soon and it becomes a distraction that negatively impacts your performance. I learned this lesson the hard way recently (OK fine… it was a few years ago, but it was really scary – and also hilarious) when I finally succeeded in navigating a switchback on a mountain bike descent and found myself celebrating as I rode right off the trail. (Lucky for me it was into a rocky field and not off of a cliff!)

When you go to the “big game” it’s hard to keep your head exactly where it needs to be. Between all of the nerves and the excitement you can find yourself straying from the mental and physical game plan you would normally engage in before competition. Take Madden’s advice, (and the advice based on years of research in sport psychology!) and remember to be resilient and stay in the moment.

So… any predictions? Will it be the 49ers or the Ravens? You know my vote – Who do you think is going to win Super Bowl 47?