Forgive and Forget: How to Shed Your Emotional Baggage for Good 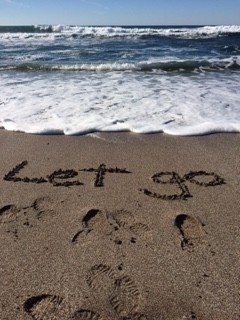 Do you ever wonder why certain things just seem to stick with you for so long?

Why you can think about something that happened 1, 5, 10, or even 20 years ago and it still upsets you to this day?

The memory of it still burns in your mind …

Why did I drop that ball?

Why did I keep running through that injury?

Why didn’t I say something in the moment?

There’s a great Zen story about two monks that were heading back to their monastery when they came to a river crossing and noticed a beautiful young woman standing on the river-bank. It had rained earlier in the day and the river was higher than usual and the woman couldn’t figure out how to cross the river. The elder of the two monks quickly picked her up onto his shoulders, carried her across the water, and put her down onto the other side.

As the two monks continued on their way back to the monastery, the younger monk was brooding and preoccupied when he finally said to his elder, “Brother, as monks, we cannot touch a woman.”

And the younger monk said, “But you picked her up and carried her across the river.”

The elder monk smiled and said, “Yes, and I put her down on the other side while you are still carrying her.”

If you think about all of those little events in your life that you continue to carry – the psychological burden can be a heavy load to bear. How can you put closure on a mistake and let it go once you’ve carried it across the river? When do you decide that you have been carrying something long enough? It often turns out that you are the only one left carrying it when everyone else has already put it down and walked away … How do you know when it’s time to let go, and how can you let it go?

Carrying your mistakes/wishes/regrets takes up valuable energy and focus that would be much better utilized somewhere else. Letting go … putting down your load is like Feng Shui for your brain. Pick one thing you’re ready to clear out and get rid of. Maybe it’s a situation you wish had gone differently, maybe it’s something you regret. Even if it isn’t related to your sport or athletic life – any psychological burdens you hold onto and continue to carry take up emotional space and that psychological baggage that can weigh you down in all parts of your life.

Think about the situation and how it went down. Think about how long you have been carrying it around with you. Think about what it would be like to set it down. Once you have chosen a specific situation you want to let go of … for four days in a row you are going to write about this same situation for at least 20 minutes each time.

Even if you’ve never written in a journal in your life – this exercise will be worth it. If you commit to the exercise, you will be amazed at what comes of it. Even my most beautifully skeptical clients have been awestruck by what they’ve worked through and been able to let go.

What you do with your written words after that is up to you. Some people read it right away. Some people choose to get rid of the paper they’ve written on as part of the ritual of letting go. Some people set it aside and read it a year (or several years) later. Some people keep it and never read it again.

The most important thing is that it’s time to tell yourself that you have carried that burden for long enough. If you don’t want to try the journaling exercise, then create your own symbolic way to “leave it on the river-bank” and let it go. It can be as simple as imagining that you’ve put that burden in a little paper boat, placing it on the water to be carried away and feeling the energy being freed up in your body and mind as you do. It’s time to lighten your load and clear up mental energy to focus somewhere else; on what you want and where you’re headed and who you want to be and who you are right now. I tell you this with all of the love my heart – it’s time to let that shit go 🙂