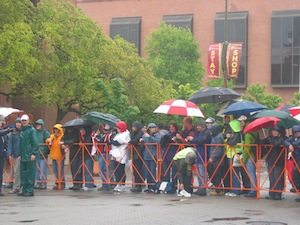 Stage 2 of the Amgen Tour of California saw yet another rainy finish come into downtown Santa Rosa. I was so hopeful that by moving the tour to May we would have a beautiful day to watch the race, but alas… all the local cycling fans had to don their rain gear yet again and endure another wet day of race spectating. I was glad to see that the rain didn’t scare everyone away! 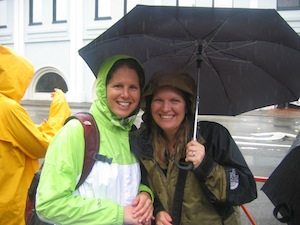 This is a picture of me (holding the umbrella) and my friend Liz Bernstein (who heads up the Bike MS Waves-to-Wine ride), trying to stay dry as we wait for the pack to come in! It was fun for me to see all of the people coming out to watch the race. I love cycling and working with cyclists and I love to see the sport getting more popular. It was also fun for me to get out and watch a stage of the tour. I have moments where I can just be a fan, but most of the time when I watch a race I see it through my “sport psychology” lens. I saw the look of a long grueling day on the faces of the riders as they came around the corner of 4th and B and I wondered how the rest of the stage had played out.

Even though the conditions were similar to last year, it was a very different finish. I often see athletes gauge their success based on how they did in the same event the previous year. Watching the finish of Stage 2 is a good reminder that you can’t always do a straight comparison of a race from one year to the next. Conditions are different, your competitors are different, the course may be different… Instead of asking the question “Did I do better than last year?” you may be better off asking, “Did I do everything I could to set myself up to be successful today? Is there anything I could have done differently that would have changed the outcome? Is there anything I could have done to be more prepared?”

In Lance Armstrong’s book, Every Second Counts, he describes the morning of the first mountain stage during the 2000 Tour de France. “On the morning of the stage, I awoke to a freezing rain. I hopped out of bed and threw back the curtains, and I burst out laughing. ‘Perfect,’ [he] said. It was suffering weather, the kind that could defeat a lot of guys as soon as they got up in the morning. ” While his competitors groaned and dreaded the upcoming day, Lance celebrated because he had trained on that exact mountain pass, under those exact conditions. He had an edge over his competitors before the stage even began.

Hopefully the guys will have great weather for the rest of the tour, but the point is that it shouldn’t matter. What matters is that you stay in the moment and do what needs to be done under the current conditions in order to have your best race. If you feel like your race could have gone better, take that in as information to build on and then wash your hands of it, get back into the moment, and get ready for the next stage.